The greenhouse effect and global warming

The future of the Earth and its climate is in our hands.

Why is earth's climate changing and what processes are causing this change? 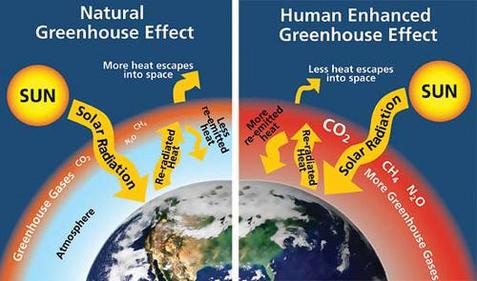 The greenhouse effect is a natural process the Earth must go through to keep the Earth warm enough for life to exist. Without this process, Earth's temperature would be thirty-three degrees colder! This is how this process works: Incoming solar radiation from the sun can easily pass through Earth's greenhouse gases and get into the atmosphere as sunlight can easily pass through glass and easily enter a greenhouse. Some of this solar radiation is absorbed by the atmosphere, the land, and Earth's ocean surfaces, (about 50% is absorbed) warming them and afterwords, the infrared radiation is reflected or re-radiated from Earth's surface back into space and can easily pass through the layer of greenhouse gases (gases mainly produced by human activities that trap heat inside the Earth). However, some of this infrared radiation cannot, and it is reflected back into the atmosphere and to Earth's surface by greenhouse gases. The gases trap some of the heat trying to escape the Earth to keep it warm. This is a natural and healthy process for the Earth, however if there are too many greenhouse gases in the atmosphere (ex. water vapour, carbon dioxide, methane, and nitrous oxide) and too much heat is being trapped in Earth's atmosphere, this could be problematic for our climate, causing it to get too warm (as shown in the diagram to the right above). The diagram on the left shows the regular and healthy greenhouse effect and the diagram on the right shows global warming. Global warming is the warming of the Earth due to an excess amount of greenhouse gases in the atmosphere. Simply explained, global warming is an enhanced version of the greenhouse effect where there are too many greenhouse gases from human activities and they are trapping too much heat in the Earth. This climatic problem has already increased the Earth's average temperature because since the early 20th century, the global temperature has warmed at a rate of about 1.3 Degrees F. Scientists predict that if we continue to produce greenhouse gases at our current rate, our Earth's average temperature will increase by3-4 Degrees F by the year 2100. We need to change our ways now!
Powered by